If you follow the road on up beyond Exohori - it's tarmac'd almost to the head of the valley where the monasteries are, even though older maps won't tell you this - I once walked from Exohori expecting the tarmac to run out at every bend in the road only to be greeted with heat haze over the sweating asphalt on every turn - and there are many before one eventually hove into a large valley heading into the Taygetus. At the head of the valley on the north side is a pyrgos (tower) in a ruined state. Perched dramatically on a crag overlooking and dominating the valley the tower ought really to be seen through flashes of lighting such are its inherent gothic propensities.

The Kitrianaris Tower - still a tempting subject for an artist

The tower is named after the Kitrianaris family and they were known for their robber baron tendencies and were in constant strife with the inhabitants of Kastania just to the south. It is therefore interesting to note that by the 1920s the descendants of the tower house dwellers and local chieftains had become respectable schoolteachers. A photograph from the '20s shows a later and be-suited O Daskalos (Schoolteacher) Kitrianaris sitting proudly next to the Papas in the midst of his pupils of Exohori Elementary School for Boys. Most of the local village schools are now closed down - the secondary school centred on Kardamili and the juniors at Stoupa, though Proastio still has its junior school. Prosilio junior school, for example, finally closed in 1999. The further descendants of Kitrianaris (now a waiter in Dionysios Taverna in Stoupa) want to restore the tower - but funding is proving problematic. 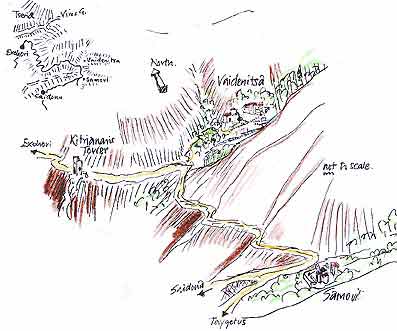 Above the pyrgos one can see the white walls and dome of the Vaidenitsa monastery church in a wooded valley. The main valley splits into two steep ravines running up towards the Mavrovouna (lit. Black Mountain) massif of the Taygetus range. Vaidenitsa is up the northern ravine through a chestnut wood. In the spring the flowers are heavenly, the shade under the chestnuts thick with purple cyclamens and anemones and Star of Bethlehems carpeting the tiny water meadows.

The monastery katholikon was built in 1807, according to the inscription in the church, and like all the buildings sits on one of a series of man made terraces above a stream but unusually outside of the monastery walls. Even so the entire site is similar to other monasteries in the area all of which were in the territory of the Troupakis-Mourtzinos family of Pano Kardamili - in that the monasteries provided a series of easily fortified outliers to the centre of their power at Kardamili. 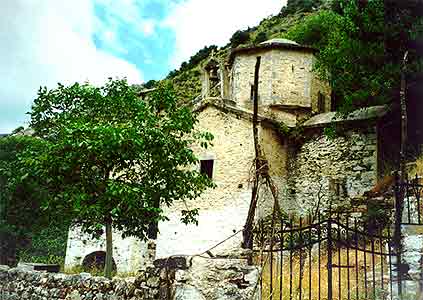 There are a number of derelict monastic buildings above the katholikon and four ruined water mills are dotted around the slopes of the valley. Peter Hartleb points out that the name Vaidenitsa is derived from the Slavic Vodonitsa - voda meaning water, 'nitsa being a common Slavic word ending meaning 'place'.

After the evacuation of Greece by the allies in April 1941 a number of allied soldiers were left behind in the chaos of the retreat - Kalamata was one of the main evacuation ports. Locals hid these soldiers some of whom were British, Australian or New Zealanders others were Cypriots from the Royal Army Service Corps, who naturally had an advantage when it came to blending in with the locals. One huge giant of a Cypriot is still remembered in the district. The Italians (who were the occupying force in the Peloponnese in the early years of the war) suspecting that Vaidenitsa was the base for these evaders burned the outbuildings in an operation on 28 March 1942. This whole area was particularly dangerous during the civil war of 1945 - 1949, with Saidona (the nearest village on the southern side of the valley) recording the highest death toll in the area from the guerilla warfare in the mountains. 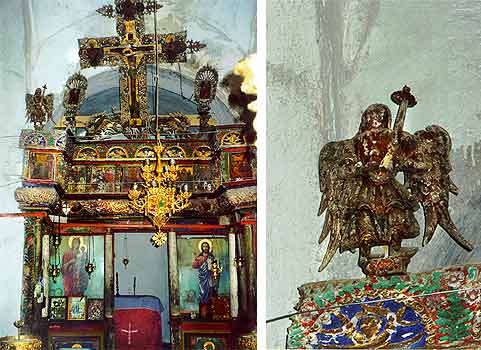 The church at Vaidenitsa is dedicated to the Birth of the Virgin (Panagia) is unremarkable but the setting is both quiet and picturesque - a barbecue down by the stream shows that the spot is used for rustic parties. The church is unlocked and although it has a very fine carved and painted early nineteenth century iconostasis the walls are whitewashed and the only fragment of wallpainting is in the prothesis of the bema - an indistinct Christ in Sorrow. The church is famed for its connection to childbirth and votive offerings or 'tamata' - small tin plaques stamped with images can be found tied to the iconostasis.

Details from the upper iconostasis Vaidenitsa - I looked up at them and muttered "What I need is a step ladder". My companion replied "So that one over there won't do then?" Yes - there is a step ladder in the church but the floor is extremely uneven - fortunately there are no photos of a slightly overweight Englishman swaying precariously to the light of flash guns atop the thing.

The valley, like many in Mani, is reputedly haunted - a local history publication has a story of "the Ghostly Goat of Vodonitisa"- so look carefully at any of our cloven hooved friends you see in the vicinity.

The monastery buildings have been recently (2000-2001) restored as a hikers' refuge and the steps up to the monastery, which used to be well nigh impossible to climb up, have been vastly improved. New wooden floors and stairs have being installed in the small pyrgos above the church. This has been made possible by private donations and voluntary work by local women from Saidona. This facility, it goes without saying, should be used thoughtfully - and, if you wish to contribute donations to its upkeep, they are welcomed at "Socrates" Taverna in Saidona or at Zorba's Tourist Agency in Stoupa.

Named after the prophet Samuel this monastery sits in the southern fork of the valley about half a kilometre from Vaidenitsa. It is another of the chain of monasteries once under the control of the Troupakis-Mourtzinos family. Although at a bend in the main track one can see the monastery when one gets closer then it is difficult both to spot its location and more importantly to actually discover a route up to it. Most of the paths have become overgrown and you have to scramble through small trees and bushes to reach the walled enclosure of the monastery. The site has immense charm, and if the season is right, some lovely fig trees, but the buildings have long since fallen into disrepair including the remains of a small pirgos just to the east of the katholikon. As the site is on a north facing slope there is something of a green mossy feel to the ruins.

The katholikon, dedicated to the Dormition of the Panagia, is a cruciform domed post Byzantine edifice and architecturally has little to recommend it.

The frescoes were once extensive but time and damp have ravaged them to the point that few are recognisable only a predominant yellow pigmentation standing out. According to a much faded inscription on the south wall of the Bema the church and its frescoes are dated to 1633. There is an extremely unexceptional and contemporary plain iconostasis decorated with standard reproduction religious icons. The church is unlocked.

Follow the road a little further on from Samouil and there is a fork to your left which is signposted to a variety of places including Githeon on the other side of the mountains. It's a forestry road and although it's not a restful drive the surface is, in good weather, perfectly adequate to drive over the mountains on - even in a two wheel drive automobile. I've driven it in a 1000 cc Fiat Seicento and had no problems or bowel churning moments and there are passing places when you meet the odd vehicle going the other way. In fact the worst part of the road 'over the top' are a small section just below Vaidenitsa on the way from Exohori and between the two monasteries, and the road from Saidona to Samouil is appalling. The road winds its way up past many terraced field systems. These are now mostly deserted and overgrown but in the past would have had wheat and other crops on them and would have belonged to people from the lower villages to provide foodstuffs during the long summer drought. There is a turning to the right which leads over a col to Kastania - but this is a track I would suggest taking only if you have a four wheel drive vehicle or are on foot.

Western side - View looking north from the pass over to Kastania towards Mavrovouni with the main cross Taygetus track hairpinning up the slopes (note the distinct fault line) and campanula growing in rocks at 1000 metres.

Wild flowers and greenery greet one as do the odd troop of goats and cows and there are small herdsmans' huts dotted about on the rare bits of level ground. The views are, naturally, pretty spectacular. At the top of the pass (c.1600 metres or 5200 feet) the road levels off and you have a spectacular vista of the southern massifs of the Taygetus looking down towards Kariovouni and Milia. There are more direct routes up the mountains - the old kalderimi - called the Vassiliki Road (the King or Emperor's Road) but they were built for two or four feet and not the internal combustion engine.

Left - View to the south towards Milia, Kariovouni and the Zizali Massif - right - Vassiliki Forest looking north towards Profitis Ilias

At the top the silence is only broken by the hissing of the wind in the pines, the trickle of a number of springs and the tinkle and bleeting of distant goats. The mountains here are called the 'Pentadaktylos' or 'Five Fingers' - legend has it that God (or Jesus - you hear both versions) rested His hand on the top of the Taygetus mountains while climbing over them and formed the peaks. After a few kilometres there is a fork. To the north is Vassiliki Forest and the village of Ag. Dimitrios which is really a collection of summer huts for people who come up here in summer with their livestock or for the abundant timber - they sensibly winter below. From here one can strike out on foot and climb Profitis Ilias - those who've done it suggest that October is the best month - the weather is cooler than high summer and visibility much better - you should just be able to see Crete on a clear day. Some adventurous souls bivouac overnight on top of Profitis Ilias - there is a roofless church on the summit of the final pyramid. The reason for this seemimgly lunatic behaviour is to see the vast shadow of the triangular shaped peak stretching across the Messenian Gulf at sunrise. I've seen photos of this natural wonder but for reasons of comfort and incipient middle age have never actually climbed up there and spent a night shivering in a sleeping bag at 2400 metres (just under 8000 feet).

To the south the road runs down along the watershed towards the Monastery of the Panagia Giatrissia at 1000 metres. It is still a dirt track but has recently been much widened and improved and often slightly re-routed by bulldozers and therefore lacks much charm. There are tracks running down valleys to Milia and Kariovouni and it appeared, from diggers at work on them, that these too were being improved. After the Panagia Giatrissia Monastery the road is serpentine but recent asphalt all the way down to Mikri Kastania and there are metalled roads all the way to Githeon.