As the road climbs up from Stavropigio and Malta it reaches a col and them suddenly the whole of the western coast of Mani stretches ever bluer away to the horizon. 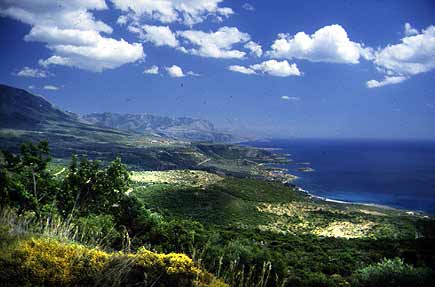 From here you can see the bulk of the Tagetus descending fast into the sea and the bulge of the Cavo Groso miles to the south. The more local view is pretty impressive, below is Kardamili on the coast, like a model, and in the summer a listless group of local firemen sit next to their shiny vehicle playing cards and scanning the horizon for possible brush fires. As everything is rather a long drive away the efficacy of this location is somewhat dubious. A boat caught fire in Kardamili harbour one summer and by the time the lads in their fire engine got there the boat was a smouldering right-off! To the north east of the Viros Gorge are a number of villages worth attention. These are usually grouped as part of the Kardamili hinterland. Prosilio (it means, literally "toward the sun" though this is a mid 20th century appellation - the older, Slavic name, which some older inhabitants may still call it, is Liasinova) is the first on the slope down to Kardamili is a small village with a striking church at its zenith.

Prosilio- church tower and view from the church steps

The church, Agios Giorgios, sported scaffolding for many a past few years and had a veritable forest of pipes sticking out of its walls - a sign that cement has been pumped into its interstices to strengthen the rough cast walls. These have now gone and its local stone shines in the evening sunlight. It is a large church by Mani standards and is probably early 19th century. Locked and, from a peer through a window, seemingly whitewashed inside its main draw is its fine Venetian style campanile which sports some folkloric carvings and a date which could either be 1802 or 1809.

Drive through Prosilio for the road to Tseria. The road snakes up the flank of Kastraki - the north side of which holds the Gaitses villages. There is a Heritage sign half way up announcing the presence of Ag. Konstantinos. I was warned by another "church seeker" to ignore it. "It's locked and insignificant - God knows why they bothered to signpost it". Of course I ignored the advice and with a twisted and swollen ankle (inflicted in England the day before a visit to Mani - great timing!) marched off in the midday heat. I can only repeat their injunction. The church, possibly the katholikon of a small monastery, is tiny, locked and of absolutely no exterior merit - and a snap taken by pushing a camera against the grilled window shows the interior walls to be totally lacking in paintings - therefore ignore the sign and drive blithely on.

As one climbs up there is a fine piece of kalderimi with a particularly good bridge over a dry ravine which the publishers of the Taygetos Road Editions Map have included a photograph of in that map's notes. I shall do the same. There is a road leading over the hill of Kastraki to the Gaitses villages - it's been recently asphalted and is perfectly driveable. 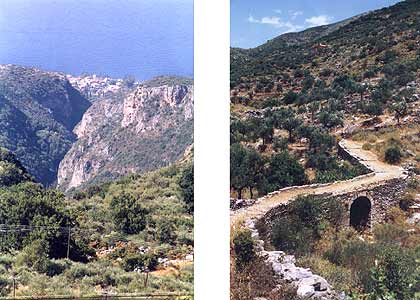 View from Tseria down the Viros gorge to Kardamili and the old kalderimi road bridge on the way up to Tseria.

Tseria itself is one of the highest villages in Mani at around 700 metres and the air is cooler than on the coast. The views down over the Viros Gorge and across the Messenian Gulf are tremendous. The village straggles along the contour line in a linear manner sometimes opening out into small squares. The main church is that of the Taxiarches - an eighteenth century affair whose main interest are the numerous folk-carvings over its external surface. The inside is whitewashed but there is a fine 18th/19th century carved iconostasis with icons including a full length depiction of the Archangel Michael. 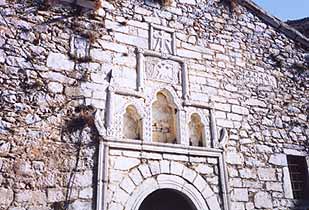 The only taverna in Tseria closed down due to lack of business - though the small general stores and bars will serve you a drink (though in 2003 the taverna opposite the Taxiarches church seemed to be doing some business and the views are spectacular). One sign which caught my eye is written in Greek but a moment's transliteration had me saying 'Keith Ambridge - Carpenter'. Keith, a Brit, is doing quite well constructing furniture for the local trade and individuals and his wife Steff runs walks for tourists (in the cooler months) around the Viros Gorge and Ag. Sofia. Keith has a website showing his bespoke furniture at this link which has contact details.

In the school yard there is a memorial to the War of Independence when the area was part of the struggle to overthrow the Ottoman rule. The village ends at the edge of the Viros gorge. Tracks go a little way up the side of the gorge and there is a spectacular view over the higher reaches of the chasm and across to Exohori, which can be reached, on foot, by a kalderimi looping across the Viros.

The village straggles down the side of the gorge changing its name to Zacharia. Formerly called Libochovo it is now (since the 1960s) named after the Klephtic leader, bandit and hero Zacharias who was assassinated here in 1804 at the behest of the Turks whilst hiding from them in the relative safety of Mani. They persuaded or paid Zacharias' 'koumbaros', Koukeas, to kill him - odd as the word 'koumbaros' means 'best man' or 'godfather' and denotes a close relationship. Koukeas didn't benefit from his dirty deed as the Turks claimed they'd wanted Zacharias captured alive and lopped off the unfortunate assassin's arms and legs. There is a small modern bust to Zacharias opposite the old school. Below this is the hamlet of Katofigio - again it has an older name still used by the locals - Kopsalomeka - "Cut Throat's Village".

Just before the entrance to Tseria there is a right hand turning down the mountain to the villages of Pedino and Katafigio. Both are tiny and there are kalderimi and paths leading downwards to Kalyves and the Monastery of the Soter at the bottom of the Viros Gorge. Each has its relatively modern largish church but also smaller family chapels.

The road from Prosilio to Kardamili sweeps in numerous serpentine manoeuvres down the mountainside and can cause frustration if one gets stuck behind either a slow moving truck or a convoy of bloody Dutch in their wretched bloody camper vans (with assorted bikes, surfboards, inflatable boats and kitchen sinks attached to the lumbering beasts). Sorry, although I have a fond regard for the Dutch, very nice people on the whole, I loathe and detest these ugly travelling homes which seem to be incapable of exceeding a snails pace and aesthetically blight almost any landscape they insist on infesting. Added to which, most of the bends on the way down to Kardamili are blind but this rarely prevents Greek drivers from overtaking in the most reckless fashion.

Half way down is a small left hand turning to Kalyves - the name possibly comes from the word Kalyvia - meaning the huts used in the summer by shepherds* - is a tiny hamlet perched on a plateau above the Viros Gorge. It has no amenities and little to attract the casual visitor - although a stroll around its street (it sort of circumnavigates the village) is a pleasant distraction. Don't expect to find much life, we were pleased to find and converse with a Dutch artist working on converting one of the old houses into a combined studio and home and a track has been trawled through the groves to the south of the hamlet leading where? As I didn't follow it what it portends is something of which I know not what. On this northern edge of the Viros Gorge - at its most precipitous and narrow point - opposite Ag. Sofia and on the same level as Kalyves - are a number of buildings belonging to someone rich and reclusive. In the grounds of this are various bits, large, very large bits, of redundant military hardware, rockets, even, and the like. I just hope I'm right about the adjective 'redundant'.

Kalyves - view east up the Viros Gorge and the central church.

There is a large open plot just to the east of the village where it is best to leave one's car. There are a number of churches within its bounds (Kyriakos Kassis lists eleven in the vicinities). The central church with its small bell tower ornamented by angels and other folkloric carvings is usually locked but from a peer through a window you're not missing much but whitewash. Just below the spot where you've left your car (if you had one - I have walked to Kalyves - via various kalderimia and the Viros Gorge once) is a small low and long single celled church dedicated to the Koimisis tis Theotokou. This is unlocked and has wallpaintings from the mid-18th century, where, that is, the plaster hasn't disintegrated. The style is simplistic and there are the remains of a Crucifixion on the west wall, Archangel Michael directly in front of you as you enter the door, a St. John the Baptist (O Prodromos) with similar wings and various martyrdoms in the nave and a better preserved Koimisis of the Virgin in the bema above the Prothesis. There was also, when I visited in June 2001 an unholy stench of animal poo. This noxious situation has been rectified in the interim and on a visit in May 2005 it was obvious that the church had been cleaned up but was still, thankfully, unlocked.

The samall chapel of the Koimisis tis Theotokou - Kalyves - the south-wall and the death of the Virgin Mary (the name of the church) on the north wall of the sanctuary (paintings - 18th c.)

Just below the church is a rather fine view up the Viros Gorge towards Exohori and Tseria. If you take the path which runs down the valley just below Kalyves to the east you'll eventually come out near the Monastery of Lykaki in the bottom of the Viros Gorge.