Again strung out along the southwards main road Thalames has a number of reasons for stopping and has more of a village feel to it with a proper platea with plane trees, the olive oil factory, run by Heinz Neth, producing the excellent "Morea" Oil. The platea has a fine arched well or washing place cum water-trough (which sticks out into the road, I know because I have inadvertently driven over it once whilst temporarily distracted from watching the road) and another well washing place which has an inscription dated to the 1770s. Thalames was an ancient site called Thalamai (or Thalamae) which according to Pausanius housed an temple to the oracle to Ino Pasiphai (the moon) which reportedly had 3 bronze statues. The village is also referred to its older name, Koutiphari.

The area was also famed for its marble quarries. The British School at Athens looked at the site as part of their Lakonia Survey in the early years of the 20th century. Marcus Tod (1878-1974) later an eminent Oxford ancient scholar, then deputy director and Librarian of the BSA, surveyed the site in November 1904 and digging, under the supervision of Guy Dickins, began in the March of 1905 and was concentrated around the spring, which was described as central to the oracle - there are no signs of this archaeological work - unsurprisingly - a century later.

Dickins published his findings in the Annual of the British School at Athens in the 1905 volume (XI). He pointed out that the two wells in Svina (another older name for the area around the two wells and small shaded plataea on today's main road) rarely dry up even in the hottest summer and that, apart from two insignificant springs in Langada there are no more springs for many miles to the south of Thalames. He was also curious about a legendary treasure which had been reported in the journal Pandora back in the 1860s, which was reportedly buried in the olive groves belonging to a certain widow Strongyleas a bit to the north of the second well. The story still had local credence at the time Dickins' visit, though he had to report that little of significance was actually found in the field. It is clear that the site has been occupied since early times, and ancient bits and bobs turn up in Byzantine and modern buildings.

For a map of the whole area from Platsa to Langada - including Thalames click here.

The main present day "attraction" of the village is the "Museum Des Manis". You will be hard pressed to miss the crude but large signs which dot the road in either direction advertising this facility. Run by a great bearded bear of a man with a beady eye for the main chance (the entry fee is, for rural Greece, rather overpriced) it is more an ill assorted collection of junk than a museum. Indeed I have been told that the owner has allegedly been spotted shopping in the Athens Flea Market. The labeling is at best hit and miss and there is little attempt to explain things either thematically or chronologically. Much in fact has only the most tenuous link with the Mani (prints of Byron, who came nowhere near Mani, and the War of Independence are much in evidence) and the various bits of agricultural machinery dotted around the rooms sometimes defy one to guess their actual use.

There are now some more felicitously designed posters grandiloquently declaring the place 'The Demangelion Museum of Folklore & History' - If the owner was selling his artifacts then there might be some purpose in the place other than to fleece the passing trade (I rather fancied some spectacularly unrealistic depictions of the Greek Italian conflict of 1939-40). The owner, a Nikolas Demangeleas, speaks good German and minimal English. Of interest is the fact that Traquair reports that a Damangeleas from Koutiphari was one of the 18th century church painters of the Itilo monastery church of the Dekoulou and other churches in the area. Obviously the family are of some importance (if only self-importance) as there is now a sculpture bust to another 20th century Demangeleas outside the kafeneion in Thalames.

Opposite the "Museum" is a tractor track leading up into the hills. Follow this for about 200 very steep metres and you will come to the tiny gem of a Byzantine church, Profitis Ilias, tucked into the hillside next to a small graveyard. Partly whitewashed and backed by some cypress trees it is a painters delight (I have actually seen a watercolour of this very church in England).

Ramsay Traquair, an Edinburgh architect appointed by the BSA to their early 1900s survey to look at Byzantine and medieval monuments listed this church as being at 'Abysola near Koutiphari' the latter name being the old placename for Thalames - many Greek toponyms changed in the mid 20th century, often during the rule of the Colonels, - reverting to ancient names or variations of them. Each hamlet of the area seems to have a different local name - they are Svina, Platanos, Koutiphari (pronounced 'Coo-tifferee') and Gorati - the area has reverted to a modern version of its ancient name, Thalamai. Traquair's plan and photograph show a small double arched bell tower over the west door - this has disappeared in the intervening century. Not locked on either of the two occasions I've visited it the church is far too small to require supporting columns and therefore the cupola is supported by the external walls via the squinches. There are some remaining fragments of frescoes of a medieval period including a sad Pantocrator in the dome. They are dignified but rather rudely painted and not of any great beauty.

At the north west end of the village(s) just off the main road is a square with a large nineteenth century church surrounded by some odd modern street lights which one supposes are the Cycladic art influenced whim of some trendy Greek architect. If you take the road running seawards from the bottom right hand corner of the square you'll pass on your left hand side after 50 metres or so a relatively inconspicuous whitewashed church - it's dedicated to the Birth of the Virgin. Inside it has conventional painted templon paintings of no great interest and a faded Crucifixtion on the west wall of 18th or 19th century period, 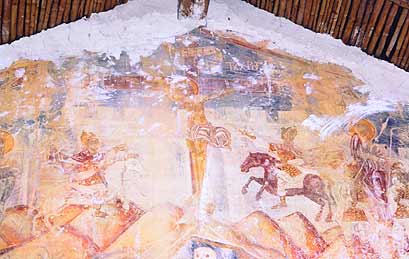 however look closely at the niches above the door. Two of them are the normal painted niches - that on the left hand side, however, is a reddish stone plaque. The colour itself is a clue to its importance as this is not local stone and thus unusual. The object is carved with a Christian cross and the initials symbolising Christ - but underneath these some ancient Greek text reveals the object as an ancient gravestone - re-used centuries later by the founder of the church, a certain Papagiannakis.

Further down the track is another oddity. Ag. Vasilios (Basil). This church is obviously Byzantine with a typical dome decorated with cloisonné brickwork. 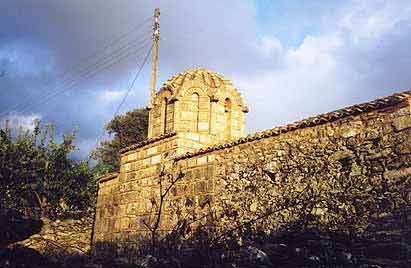 The dome seems strangely large in proportion to the building itself like a huge hat on a leprechaun. There is a southward extension to the church in extremely crude stonework which must have been added in more recent centuries. Inside - it is unlocked - the newer section is unplastered and the entire structure has a beaten earth floor. The Byzantine section has some remaining frescos of, I would guess the 14th or 15th century, though some may be of later provenance (Rogan reported that the church was restored in the 1960s and that there were two layers of frescos - the earlier from the 13th century - the later post-Byzantine - there is a date at the bottom of an inscription which seems to read 1672). There is a fine, if fragmentary, Garden of Gesthemane scene with soldiers in late Byzantine armour.

The Panagia in the Bema is rather crudely painted, rather like the Pantocrator in Prof. Ilias up the hill, but has the same sad seriousness that is in sharp contrast to the often bland and benign sweetness of post- Byzantine depictions. 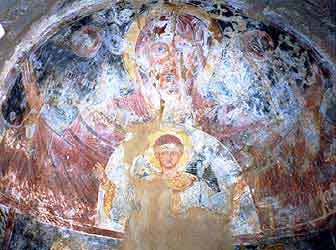 There is a mention in some sources that Koutiphari had a castle at some period in the late middle ages. The Emperor Manuel II Palaeologus,1391-1425, is reported to have ordered the destruction of a number of local castles including Beaufort, Magne, Koutiphari and Passavas in order to pacify the local population. I've never heard of a castle or the remains of such in the area, though there is a possible kastro at Trachila on the coast below. Local chums have no knowledge of a castle so any reports or sitings are welcome.

There are more churches in and around Thalames which are worth an hour's stroll, a cemetery church of Ag. Nikolaos to the south of Ag. Vasillios which allegedly has wallpaintings but was firmly locked when I tried to gain access but returning to my car I at least had the pleasure of being given water and fruit by two delightful local old ladies who took pity on a sweaty and thirsty foreigner.

Niche above the door of Ag. Nikolaos Thalames and the two kind ladies who gave me refreshment

For a map of the whole area from Platsa to Langada - including Nomitsis click here.