Above Kardamili a line of bluffs appear on the edge of the escarpment which marks the edge of the plateau area which stretches from Exohori to Pyrgos. It appears from sea level that each of these is crowned by a domed church and in three cases this is in fact true.

Left and right - views from Karaveli of Ag. Sofia - centre Karaveli itself

The escarpment is sharply indented by ravines and on the promontories between these are some fascinating old churches and small hamlets. Nowadays one can drive up to each of these by a quite passable asphalt road that winds up the escarpment. It starts from the south end of Kardamili village next to the local Dimos (Council) Buildings and after half a kilometre veers sharply southwards before swinging north up to Petrovouni, the first of these hamlets. Since 2002 there is a further extension of this tarmac which veers off to the east between Petrovouni and Karaveli and snakes through the olive groves and joins the road to Exohori just below Lakkos. This is a useful route as it cuts out driving all the way through Proastio to get to Exohori.

For a sketch map of the area around Kardamili including places mentioned in this page click here.

One can walk up to this location via a switch-back kalderimi which hair-pins its way up the scarp and in the recent past this was the only way to reach these perched settlements - one feels for the generations of schoolchildren who have had to traverse this path on a daily basis. Petrovouni means rocky or stony mountain. There is little to the hamlet save a few houses and a general scruffy farmyard feel though a Dutch family have a rather fine flower garden in their home.

Petrovouni also has the small monastery of Phaneromeni. Little remains of the monastery buildings but the katholikon is still obviously used on rare occasions. It is set back from the road in a locked compound, though it is relatively easy to get round the back of the church through the fields. The church has invariably been locked when I have passed but with some perseverance one can work out who has the key (it took me about four tries over 5 years!).

The church was probably built in the 18th century and the wall paintings are thought by experts to date from around 1770 and can be partly viewed through a window on the south wall if you don't want to play 'hunt the keyholder'. Although there is no dedicatory inscription naming the painters, the paintings are recognisably by the same painters as at the church of the Koimisis at Stavropigi, Zoodokos Pigi at Zarnata and the monastery of the Panagia at Gaitses. This dates the frescos to the 1780s or thereabouts. The condition of the paintings is not very good and there has been much candle soot damage but in such a fair sized church the themes are pretty fulsome with a depiction of the last psalms (the Ainoi) in the western vault and a preponderence of depictions of the life of the Panagia.

Monastery of the Phaneromeni, Petrovouni. 1780s period paintings of Saints George and Dimitri together rather than, as is normal, on opposite walls and scenes from the last Psalms (Kings, Judges, Dancers and Musicians all praising the Lord)

The outside, mainly on the walls of the apse, has representations of a number impressively sailed ships carved into the stonework of the walls which one of my companions, schooled in the difference between the sail configuration of a schooner and a barquentine, explained to me. 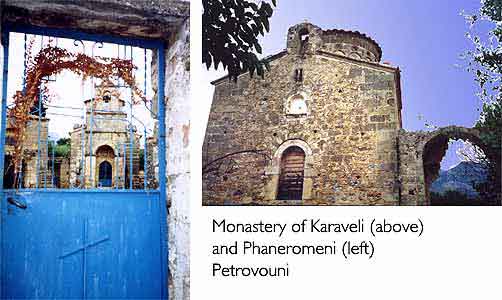 The next spur of the scarp is opposite Petrovouni and surmounting it is another monastery church. This is the monastery of Karaveli or Strititsiou and here the old monastery buildings and its surrounding walls are more evident if in a parlous and frankly dangerous state of repair. Both this and Phaneromeni were outlying defensive positions for the Troupakis-Mourtzinos kapetani who dominated the Androuvitsa area of the Exo Mani. There are clear clues to the defensive nature of the monasteries at Karaveli with distinct bastions in the remaining surrounding wall. 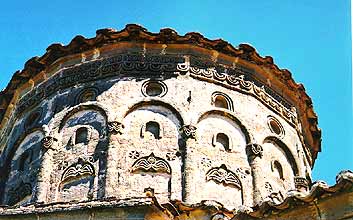 The dome of Karaveli with folkloric carving of Archangels

Again the church is kept locked, and no-one I have asked sems to know where the keys are held. Although one source claims that the interior is well decorated my assiduous peering through cracks and crannies has merely led me to believe that the walls are whitewashed. An inscription on the exterior walls dated 1808 seems to allude to building works of a later date than the original construction.

To the north one can see the dark stoned and extravagantly domed church of Ag. Sofia on the other side of a precipitous ravine. To get to this most northerly of these church topped bluffs one must follow a circuitous route along a track which takes one some half a kilometre or so inland until the ravine peters out and allows one to return eventually to a spot opposite where you started from. In the process you will come through the hamlet of Ag. Sofia - named after the impressively domed church at the tip of the bluff. The village is also called by its older name Gournitsa. This is derived from the Slavic and means "the place above". The village was on its last legs not so long ago but although many of the buildings are still crumbling there are signs that some houses are being repaired and tarted up. 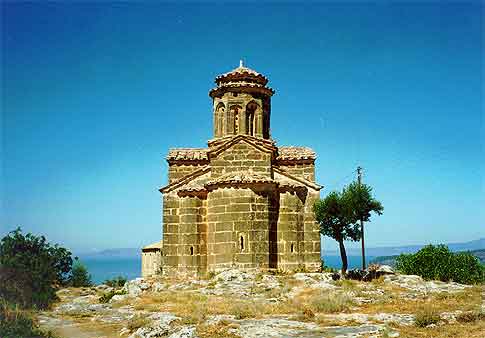 By the way, before reaching the hamlet of Ag. Sofia the the track passes a turning to the right which if followed drops over a low col and then follows the upper southern edge of the Viros Gorge with marvellous views down to the bottom and Moni Lykaki and will eventually lead one down to the Monastery of the Soter at the foot of this defile. Near this turning a marked track (in part kalderimi) climbs up to Exohori some few kilometres distant.

The tall 'cross in square' church of Ag. Sofia (The Holy Wisdom) is on a rocky plateau overlooking the sea and is made of the locally quarried stone - there are clear signs of old quarries in the vicinity.

To the south east is a small cemetery and below the west door of the church an old house but Ag. Sofia seems oddly isolated on its lofty, stony eyrie. The church is locked, though, it used to be that if you timed your visit correctly, you'd bump into Eleni, the lady who cleaned and looked after the building and who was delighted to let you in and explain some of the frescoes - in Greek, naturally. However she is reportedly, and sadly, too ill to continue her duties. If you want to get the key you'll have to ask the Papas in Kardamili, as the church is part of his parish. There is a window one can peer through on the south side but otherwise the door is firmly chained and padlocked. 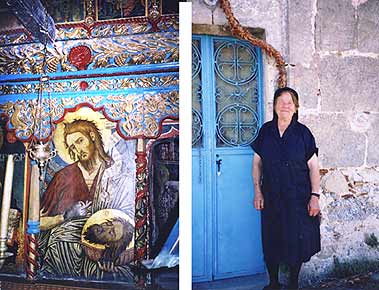 The icon of Ag. Iannis Prodromos (John the Baptist) in the iconostasis Ag. Sofia and Eleni the friendly lady who is the proud key holder of the church.

The interior is frescoed though they are somewhat darkened by centuries of candle smoke and some areas have succumbed to damp. There is an ornate and extremely colourful carved iconostasis of the late 18th/early nineteenth century model painted (one suspects quite recently) mainly in a vivid light blue. The iconography of the church follows a reasonably common theme and Rogan speculates that the wallpaintings date from 1700. Looking at them I wouldn't be surprised if the upper level paintings are originals and some of the lower ones are later overpaintings.

Archangel Michali (Michael) and musicians from the Ainoi (Psalms)

Certainly they are earlier than the normal mid 18th century fare in most churches in the district - the set of the folds in the cloaks and other vestments of the figures points to a more sophisticated artist working in an earlier genre. The layout of the church - which is very tall - is that of a cross in square with columns supporting the slender dome. There is a version of the Ainoi (The Praises - or depiction of the last psalms) in the vault of the west end - showing the miriad animals and creatures and musicians and dancing women. The central part of this scheme seems to show the Judges of the Earth but the arch is a long way up and the paintings appear to have been badly smudged at some time in the past. (For a fulsome analysis of the Ainoi paintings in Mani click here)

Agii. Theodorii and other Saints and carvings in the stones of the building dated 1604 - Ag. Sofia - Gournitsa

The church is thought by some to have been built in the 15th century whereas Rogan gives a date of 1630, although carvings on the south wall point to a date of 1604 and the architectural shape and curved decorative tile work on the dome remind me of the monastery church of Ag. Paraskevi to the west of Doli which is probably of the same period. 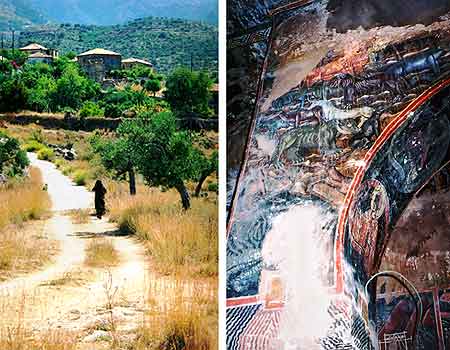 Eleni returning to the village of Ag. Sofia and the Beasts of the Earth from the Ainoi frescoes Ag. Sofia

Back in the village at the top of the tiny hamlet is another church which is that of the Panagia (Virgin). It's a single chambered affair with a a pitched roof. According to Rogan, who dates it to 1763, it has a number of interesting frescoes. One shows a local legend of a miracle with a woman in Maniate costume working at her loom and the colours of the horses of the military Saints are reputed to be slightly eccentric. I've not got into the church, which is locked, Eleni explained that she didn't have the key, and I have only managed to photograph into the Bema through an open window. The ceiling is not frescoed being constructed in the traditional Mani way of canes.

To the north of the church of Ag. Sofia a track leads down the hill and at a point some 100 metres down this is a tiny niched chapel carved into the rock with fading painting on its surface. I was peering intently at this when I realised I had a companion. A small green tree snake was dangling from a branch not far from my right shoulder. I don't know who moved faster, the snake or myself, as he scuttled panic stricken up into the foliage and I leapt back using a burst of speed my companion didn't realise I had in me. The track either continues down to the north east and will eventually bring you out at the bottom of the Viros Gorge close to the Monastery of Lykaki or there is a track to the west which follows the southern edge of the hill which was once the Acropolis of Mycenaean Kardamili. According to R. Hope Simpson who explored the acropolis in the 1950s there is some evidence of this early occupation and the remains of medieval walls above ancient foundations on the summit. The path drops down quite steeply and brings one out eventually past the so-called graves of the Dioskouri (the twins Castor and Pollux who were reputedly born in the area) carved into the solid rock, and which are probably Mycenaean, to the north eastern corner of Pano Kardamili.