The following linked pages are a very brief skim over the history of Mani. The sheer scale of time coupled with the intricate complexity of the interacting factions and players can either become too complex or too bland. I hope I've reached some sort of balance and focused on the important or interesting strands in Mani's history. No history can be objective. This one is based upon as much reading as I have been able to unearth and comprehend. My grasp of the Greek language is rudimentary and therefore much excellent Greek material remains closed to me. Some of the conclusions of this history won't please all readers. So be it - let them write their own. In many ways the real history of Mani is unwritten as that which we can ascertain deals with the Emperors, Despots, Klephts and Kapetani and all too rarely with the everyday Maniate. Also many of our impressions of Mani have been received, perforce, through the distorting lens of foreign visitors - this history is no different.

My history begins with the Byzantine period. This is not because there is no ancient history of Mani - just that it is generally a list of sites, most of which have merged in so well with the landscape that they have all but disappeared. What history there is can hardly be pulled into a coherent narrative. There are no spectacular ancient sites in Mani, no Epidavros or Olympia. No Ephesus or Pergamon and rarely even the stumps of a column. The ancient Greeks seem too remote and their remains so fragmentary - I can rarely relate to a series of shin height foundations or a variety of shallow trenches with a sign stating "Throne Room" above them. Perhaps I lack the imagination. If you want Ancient Greece and Rome there are other sites in the Peloponnese, but not in Mani, which will slake your curiosity.

Pausanius, the Rough Guide author of the 2nd Century AD, wrote extensively on the ancient sites of Greece. Even at the time he was writing these were often already in ruins and related solely to legend and hearsay. His circuit of the Mani peninsula describes a variety of cities (by which we must imagine, important villages) and sacred groves and temples. The remains of these are still to be found in Mani, not, unfortunately, as recognisable buildings or often even foundations. Instead, as in many locations across the spread of the ancient world, as the civilisation crumbled so its successors re-used and recycled its architectural remains and popped them into their own buildings. At Tlos in Turkey I have seen an ancient Greek inscribed stone used by a local farmer as a convenient chopping block. Many a Byzantine church in Mani wears the re-used columns of an ancient Greek temple. Ancient capitals, gravestones and memorials pop up in the most unlikely locations. Wherever relevant I have mentioned ancient remains and sites in other pages. The map below gives a rough idea of the major ancient locations in Mani. 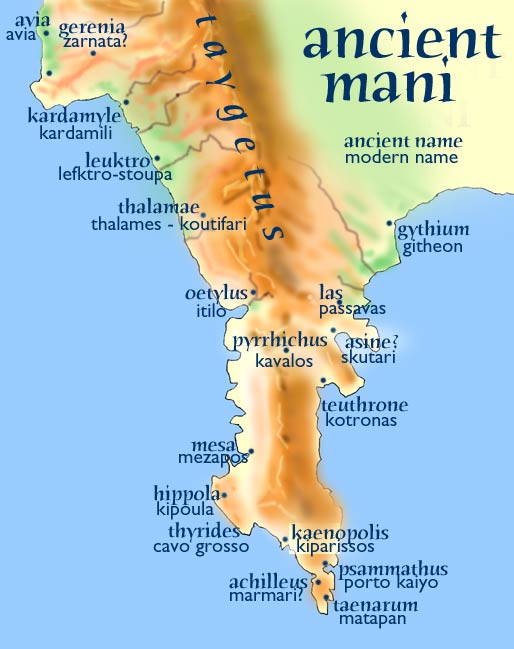 The history is divided into four parts. Byzantine describes the period from c. 500 AD until the Frankish incursion of 1204. This period is tagged onto the whole high medieval age until the final demise of Byzantium in the Peloponnese in 1460. There is a related page on the puzzle of the location of the Frankish castle of Grand Magne.

The Turkokratia describes the period between 1460 and the early nineteenth century when most of Greece was under Ottoman domination. Finally the history of Mani from the War of Independence to the present day is described in 1821 to the present.